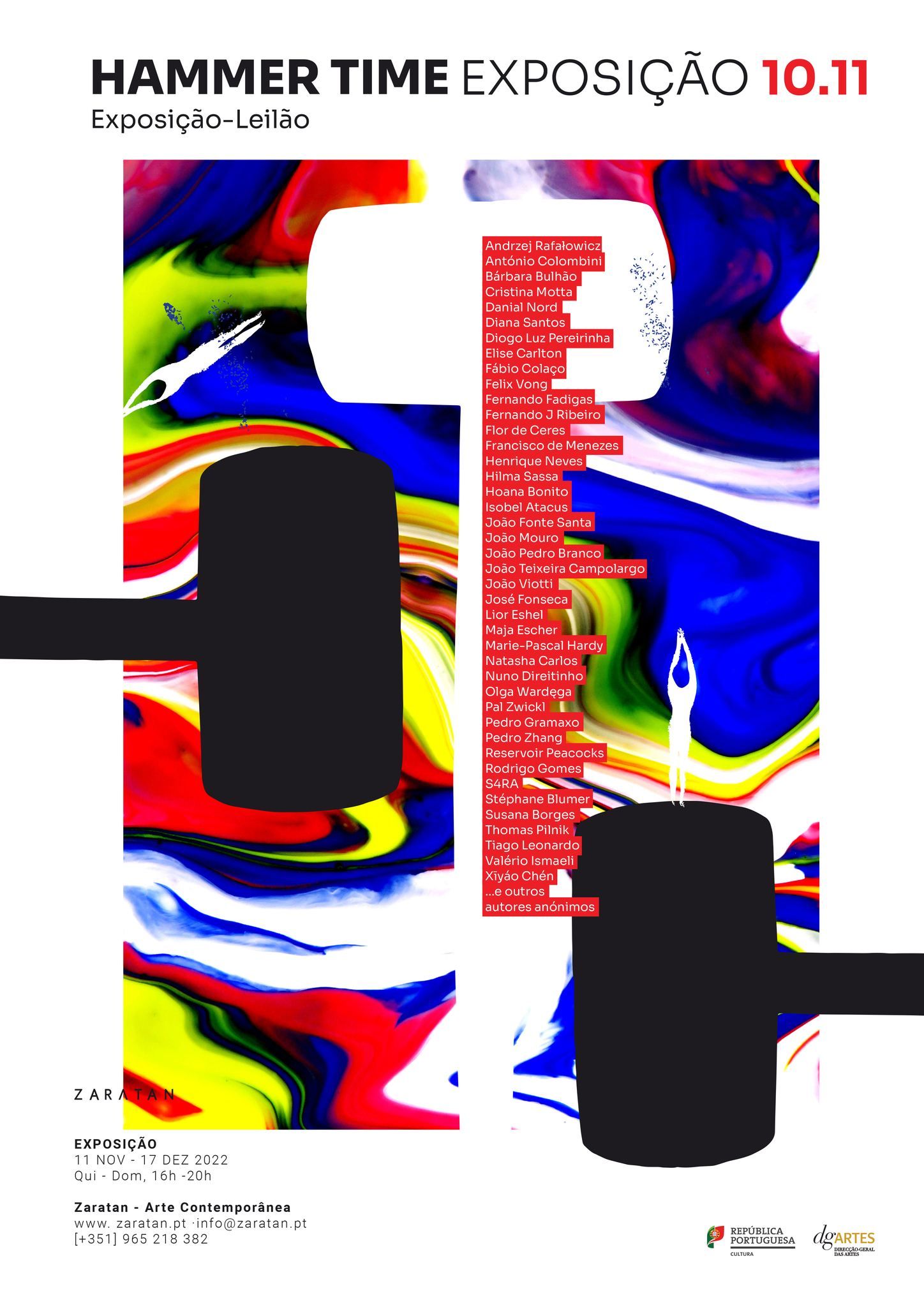 
OPEN | 10 November – 18 December, 2022
TIMES | Thu-Sun, 4pm-8pm
PERFORMANCE-AUCTIONS | 27 November and 4-11-18 December (at 5:00 pm)
SUPPORT | Direção-Geral das Artes / República Portuguesa
Zaratan is pleased to present the auction-exhibition “Hammer Time”, an art show and a performative happening that aims to engender a micro-investigation about the value of the work of art from a peripheral position in relation to the market. At the same time, “Hammer Time” is a fundraising event, whose revenues support both participating artists and the sustainability activity of the artist-run space Zaratan.
The participation in the event was open to all, invited to submit applications, and the selection process brought together more than 50 works, both physical and digital, from more than 45 national and international artists.
The contemporary art system is articulated in structures and circuits of production, circulation, sale and dissemnation, in which various actors play roles of synergy or antagonism.
By pantomimeing the structure of the auction [as a market institution characterized by an explicit set of rules], Zaratan [as an independent space] seeks to test possible alternative accesses to the so-called commercial art world, but always presenting challenging work and without giving in to trends and the fashions of official circuits.
Moreover, the analysis of the connection between the aesthetic value and the economic value of a work is crucial to understand the general meaning of artistic production as a phenomenon peculiar to the culture or subculture in which we live.
The value of a work of art, considered only from the point of view of the person who loves, owns it or wants to possess it, is immeasurable. As the aesthetic value cannot be completely objectified or quantified, a work has value as long as it can be publicly appreciated, that is, it needs a public space where the sharing of form evaluations can take place.
The institutional channels of art – museums, galleries, foundations – used to provide this function, and still do so to some extent when they are not corrupted by individuals who manipulate art only as an investment. The current money system turned several of the great institutions of public culture into a promotion and commercialization circus, forgetting the value of the connection between public and artistic creativity.
Responding to the absence of alternative modes of production and cultural sustainability, Zaratan intends to become such a space for discussion and involve collective participation in order to instigate a public debate, in the form of an auction, on the valorization of contemporary aesthetic production.
“Hammer Time” will also be accompanied by a series of 4 performance biddings conducted [live and in digital simultaneously] by an auctioneer invited by Zaratan: the artist João Pedro Branco.
The exhibition and paralel event integrates the program of Lisbon Art Weekend, happening on November 10-11-12-13 with extended opening hours (12:00-20:00).