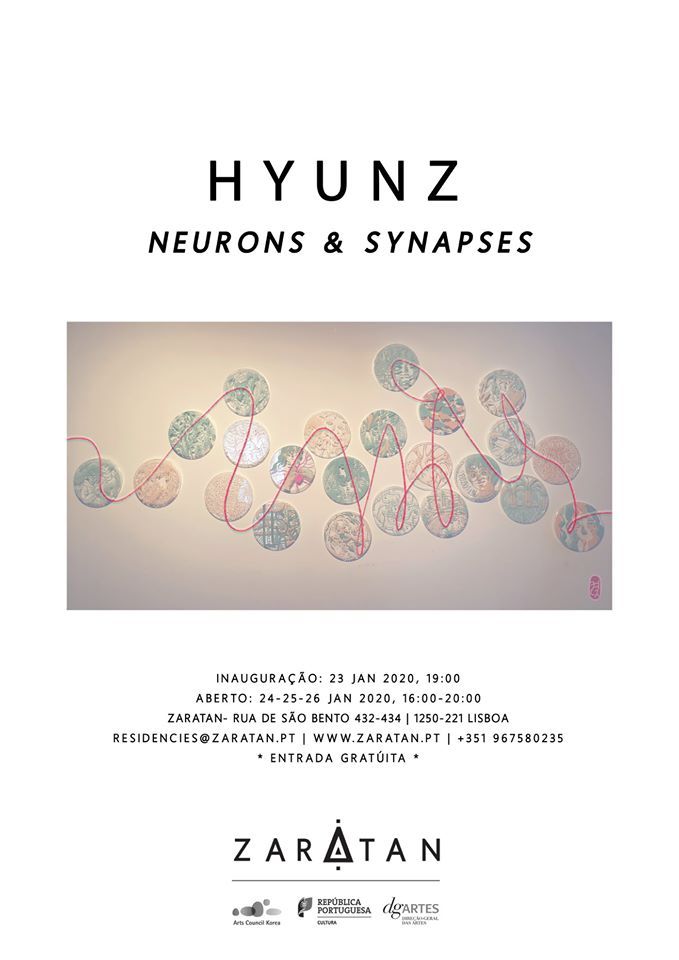 Zaratan is thrilled to present “Neurons & Synapses”, a flash solo exhibition by Hyunz (aka Park Hyun Ji), who is presenting the work developed during her one month residency at Zaratan.
Hyunz is a South Korean multimedia artist, best known for her video animations made up of thousands of drawings and dozens of different materials, such as paper, silk, cloth, flip-books and plastic. Containing no dialogue, these digital-made films use combinations of images and sound to raise questions about what we perceive as humans in relation to each other and to the world. The stories she created stem from the observation of ordinary people’s experiences, and are often populated by her imaginary characters, Lema (“Dilemma”) and Os (“Chaos”), that become personifications of the artist's personal interrogations.
Hyunz’s recent works are particularly concerned with human interaction, interrogating how people are connected to each other, and exploring the space between the individual imaginary and the collective one. In “Neurons and Synapses” the brain activity become a metaphor of the the functioning of society, resulting in amazing complicated network of cells that communicate and connect to each other into structures, systems and networks.
This exhibition, Hyun's first one in Europe, includes two unseen animation made by the artist, a series of drawing and two tridimensional installations.

BIO:
Park Hyun ji is the South Korean visual artist who art brand ?'kyun'. Her art expresses itself through different media, such as video-mapping, installation art, drawing, publishing and animation. As an art activist, she works in art therapy and art education, and seeks ways to share various visual expressions. She graduated from cartoon animation and obtained a master's degree in art therapy. In 2019, she collaborate as artist for a research project in Daejeon, South Korea. She studied the effects of animation on human mind and her writing ‘The Effects of Comic Animation based Group Art Therapy on Children's Emotional Intelligence and Sociality’ was published in the Journal of the Korean Academy of Childhood Psychotherapy.

> The residency program Zaratan AIR is supported by República Portuguesa – Cultura / Direção-Geral das Artes and the project by Park Hyun Ji is funded by the Art Council Korea.