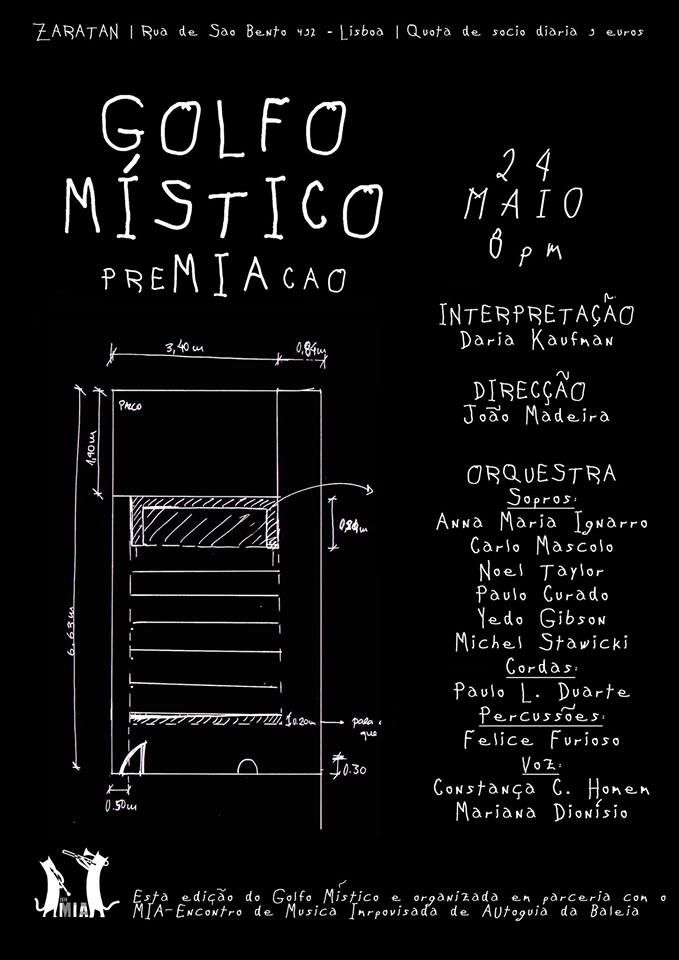 
We are pleased to invite you to a special session on Golfo Místico, preMIAção, which counts with the collaboration of the organization of the MIA - Encontro de Música Improvisada de Atouguia da Baleia, which allowed the inclusion in the orchestra of several international musicians, passing through Portugal in the direction of Autoguia .

With curatorship of João Madeira, Golfo Místico is a cycle of improvisation, to happen once a month in Zaratan, that intends to create a collaboration between the music and the visual or performative arts.
The cycle involves two parallel and subsequent calls. On one hand Zaratan will invite a different artist to each session - linked to the performing arts, dance, visual arts, among others - to elaborate a list of 5 sounds / musical themes / melodies; on the other hand João Madeira will gather and direct a small orchestra, with different formations, in order to translate and interpret one or all the 5 songs suggested by the artist, who is challenged to improvise live during the concert.

The INPUT is therefore provided by the musical themes (from all possible universe, known or unknown, traditional or erudite, vocal or instrumental, from electric or acoustic sources) that have been associated with moments, images, memories, dreams, nightmares, states of mind or emotions important to the guest artist. The OUTPUT of the cycle Golfo Místico is an artist video that will lately be edited in a DVD.

With this series of encounters between musicians and artists, we hope to generate valuable creative processes and encourage collaborative and interdisciplinary practices by presenting works still under construction with an improvisational attitude. Each performance, concert, interpretation, tries to be conceptually different from the previous one, at the technical, formal and performative level, as well as in the media and the methodologies used.